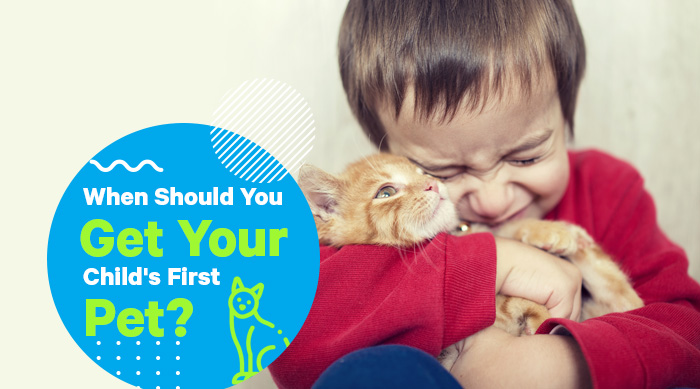 When Should You Get Your Child’s First Pet?

Although there are some who argue that the day of the pet has passed and they have no place in an enlightened home, in reality, most of us still love them. Our children probably will do likewise.

The question as to when to get a pet for your child is complex. It hides many different issues.

The age of your child

Clearly, very young babies are incapable of reacting to a pet. Given your new arrival will be consuming huge amounts of your time, adding to your overhead by taking on a new pet might be unwise at this stage.

However, from a very early age, children can recognise pets. For example, even 4-6-month-old infants will be fascinated by goldfish and will sometimes try to reflect their swimming movements with their hands.

Pets at early ages should be things that are entirely safe and for you, very low maintenance. They also need to be housed somewhere your child can easily see them but without being able to touch and the pet home should be absolutely secure and not able to be pulled over.

Fish are a great example of a child-friendly pet in earlier ages. As children get older, you might be able to think about a wider choice of pet.

It hopefully goes without saying that pets should always be considered first and foremost, from a safety-first viewpoint.

Try to avoid caged animals that are friendly but also have a tendency to nip. Little fingers going into cages can get snapped at very quickly even by normally placid animals like hamsters and rabbits.

That can be very hard to communicate to younger toddlers, who just see pets as the cuddly things they’ve seen in their books and something to be picked up etc.

It isn’t easy to think of too many pets that are genuinely totally safe with toddlers under the age of around 3. After that stage, your child should be able to distinguish between things they can safely do with pets and things they can’t.

Before the age of 3, you’re probably restricted to fish, some reptiles and perhaps some forms of birds in aviaries, at least if you wish to be really safe.

These are by far the most common domestic pets.

In the case of cats, they’re commonly regarded as being potentially temperamental. Bites and perhaps more commonly, scratches, can be a real risk to children and particularly younger ones who won’t understand why the cat doesn’t want to be cuddled or played with.

It might be worth thinking very carefully about cats as a pet for children much under the age of 5 which is the age at which your child should be able to fully understand the “do and don’t” safety tips with their cat.

Dogs are a much more complex challenge.

Assuming you don’t have one already, remember that a new puppy coming into the house is going to grow very fast and be a bundle of energy. If it is a larger breed, its sheer playful exuberance could mean it grows to a size that very quickly means it could send your toddler flying in play.

Remember too that your dog will see you as the alpha male/female of the pack and your child as its equal. That might mean it will try to engage in ‘rough and tumble’ play that could involve gentle friendly nips with the toddler. They may be well-meant but it’s something most of us would wish to avoid with younger children.

It might mean that you should think carefully about a dog for your child any earlier than around 5-7 years old – possibly even older if it is a larger breed.

Finally, although it is controversial, do remember that some dog breeds are recognised by experts as being “very challenging” in terms of aggression and control. Such breeds might be totally unsuitable for children of any age.