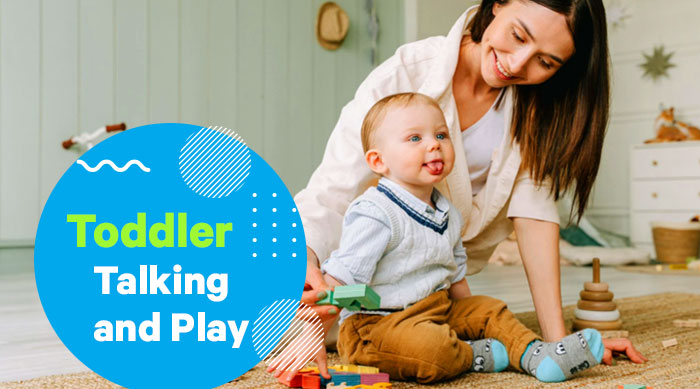 Around the time your baby turns into a toddler, you should start seeing them making more and more efforts to speak.

The links between that phase of their life and play are surprisingly complex and important.

What are the key stages?

Remembering that every child is different, very broadly speaking before they’re a toddler you should already have noticed that your baby is making lots of sounds. They’re usually just noises but some may be repetitious and only demonstrated at certain times – like if they’re trying to reach a toy.

That is one of the first visible signs that they’re experimenting with speech, even if they don’t know they are.

Sometime between 12-18 months, your child should be able to use some words though they may be “baby-speak” that only you understand. They should certainly be babbling when playing.

By the time they’re roughly two, they should have a vocabulary of some words such as perhaps “doggie”, “toy” and “potty” etc.

Around three years old, they should be constructing simple sentences and be fairly intelligible to everyone.

The role of play

Speech is driven by many things including imitation of parents and others.

Yet a very powerful force is the baby/toddler’s realisation that they can use speech to achieve their objectives and influence the world around them to their liking. That might be in examples such as “sweetie!”.

A very powerful part of a child’s overall learning comes from play. Even when playing alone, you might hear them talking away to themselves.

Of course, playing with others is even more important. There they’ll be communicating with you, other adults or other children. The need for communication in play is critically important and it helps toddlers sharpen their linguistic skills.

That’s why providing as many opportunities for play as possible, is so important.

Children develop speech at different rates and some are simply faster at acquiring complex language skills than others.

As adults, we also know that some people just seem to have better articulatory skills. The reasons for this are not clear but both genetics and early learning environments as toddlers may play a part.

So, if your toddler seems a little late in developing such skills, it is rarely a cause for concern. However, there may be some signs that it would be prudent to consult your doctor if:

Many potential issues, such as hearing problems, should be picked up early as a result of routine child development health checks but don’t hesitate to share any concerns you may have even if such checks have previously been ticked as “OK”.