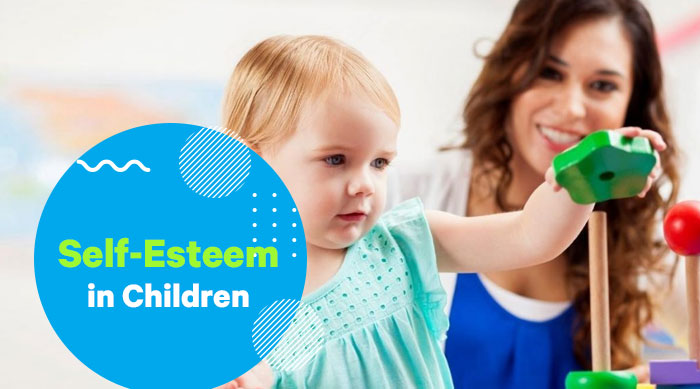 Self-esteem is a combination of various things. It means we value ourselves and our activities, plus have a degree of realistic confidence in our abilities to influence what goes on around us.

The foundations for the development of self-esteem seem to be developed even at pre-toddler ages.

It’s possible that there is a relatively minor genetic component.

That’s because some babies and toddlers just seem to be more confident and self-valuing than others, even when the degree of parental support appears to be more or less identical. This can be demonstrated in the way some babies will be very determined and confident in starting to toddle and be able to reach things, whereas others appear to be more nervous and perhaps unsure of their abilities.

Most self-esteem though is assumed to come from the support environment that surrounds the baby and early toddler. The presumption is that the more encouragement and recognition the child gets, the more it will develop a sense of self-esteem.

It isn’t entirely clear but some specialists suggest self-esteem can be seen in babies from the time they develop self-awareness, within just a few short months of birth in most cases.

There is evidence that children with higher self-esteem will find schooling easier in later life. As such, most parents and care providers will be looking to enhance such.

There is now accepted to be a link, though poorly understood, between ASD (autism spectrum disorders) and low self-esteem in children and younger children.

This does not mean that toddlers and younger children with apparent low self-esteem are suffering from ASD. It is much more likely to be arising from family or pre-school situations.

Even so, if your toddler or pre-school child is seemingly suffering from low self-esteem (typically manifest if their belief they “can’t do things” and/or a refusal to try) then it might be advisable to have an initial discussion with your doctor.