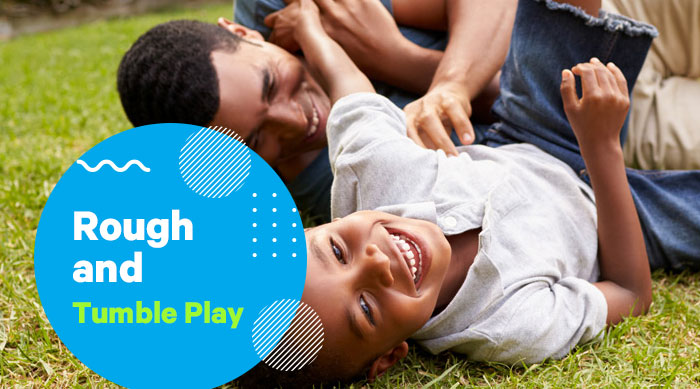 Although it is sometimes questioned, the role of strong physical play is important in healthy child development.

So, you should not worry if your child likes rough and tumble play and expects you to join in!

Almost all children love spending time exercising their bodies in a play context.

Even from babies, their expression if bounced on the knee or given a little ‘aeroplane ride’ in the air is incredible. They love it!

As they age, that is likely to transition to things like chases, wrestling, jumping around, racing, playing on swings, playing sports and so on. Yes, that might also include at times the odd scrap with another child, something which is typically harmless and also probably unavoidable, even if it must be controlled and used as a negative learning opportunity by parents.

Human behaviour here is closely analogous to that seen in many higher animal species.

Children use rough and tumble play to help them learn to co-ordinate their bodies, to experiment and develop emotional control and to build relationships with others. It’s an essential part of socialisation.

This is essential and necessary for a child’s physical and emotional development.

Why this has been controversial in some quarters

Although these trends are now receding, for some decades people questioned whether rough and tumble play should be permitted. The reasoning fell under several areas:

Such concerns have now largely been superseded by the recognition that while some of these are issues to be guarded against, they are far outweighed by the health and other advantages of rough and tumble play.

Can things go too far?

It is very common to see children who are becoming over-excited in this type of play and who are, as a result, seemingly finding it harder to keep control of themselves and their emotions.

This isn’t serious. It’s all about children learning acceptable parameters and gaining life skills. Rapid intervention and gentle explanation will be required.

Usually, such issues are rare and minor and will decline as children grow and learn.

There may of course be the odd exception. You may be advised to seek professional advice if you see your child demonstrating:

However, problems here are uncommon and you and your child should enjoy healthy rough and tumble play as and when you feel like it!