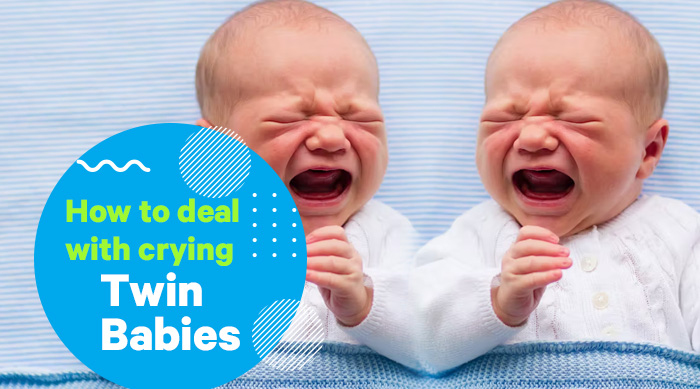 How to Deal with Crying Twin Babies

Having twins is a wonderful experience but it brings with it a few special challenges – such as what to do when they’re both crying at once!

Let’s say at the outset that there’s no single easy answer to this one. When your twins are both wailing at the same time, your head is likely to spin and there’s no sure-fire way to avoid that!

The key message is not to feel inadequate. Two babies crying at the same time is a tough load for anyone.

Firstly, let’s demolish the notion that twins cry more than singletons. There is no evidence to support that at all. Each child probably will cry at the average level for a baby of their age.

Of course, that means you’ll still have roughly double the crying load to deal with.

Secondly, there isn’t much if any evidence to suggest that one twin crying automatically triggers the other to join in. A lot depends upon the reason for the crying, with a normal cry for food or a nappy change not necessarily having any effect on the other. Of course, if one is frightened or alarmed, their crying may be more of a signal to trigger their twin to join in.

Finally, it’s not the case that they’ll always cry together. One might be bawling their head off directly alongside the other who is sound asleep.

What happens when they do cry together?

The first thing is, you’ll need to prioritise unless you have someone else around to help.

This isn’t an easy thing to do but you might be able to sense that the need of one is more urgent by:

Most people with twins quickly learn to cope however, don’t try and be superhuman.

The workload with twins can be massive and particularly so if one or both of them happen to be babies that cry a lot.

The easiest way to cope with a situation where you’re becoming exhausted is to ask for help from family, friends or your local authorities.