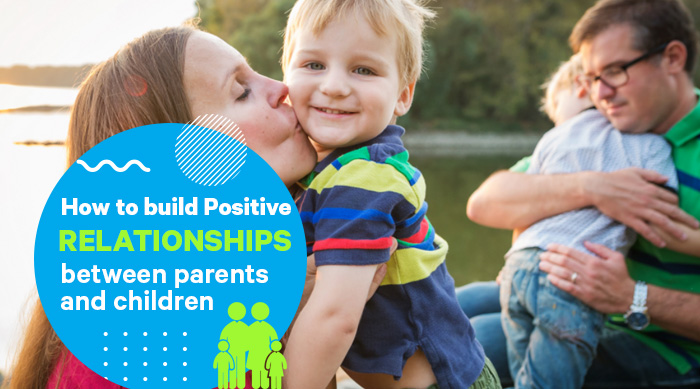 How to Build Positive Relationships Between Parents and Children

Let’s say at the very outset that discussing this isn’t easy!

That’s because every single parent is different – and every single child likewise. What works in one relationship might not in another. Most parent-child relationships will need to find their own way.

So, in this article, we’re speaking in general terms and using some common sense to describe some key components.

Make time for your child

You simply cannot build any form of substantial relationship, particularly with your child, unless you’re able to invest significant amounts of time in doing so. The intensely personal nature of this relationship is such that it just cannot happen if you’re elsewhere for much or even most of the time.

To be clear, this is a very different proposition if you already have a close relationship. For example, going away for several months on an extended business trip when you have an existing great relationship with your 12 year-old child might be one thing, Doing so when your child is perhaps 2, might offer much more significant challenges in terms of building a relationship.

The bottom line is simple. Whatever the pressures of your daily life in other areas, you must make plenty of time for your child – particularly in their earlier years. That means playtimes, eating together where possible, regular trips out, watching TV together and so on.

Demonstrate that you value them

As an adult, you’ll probably understand the complexities and subtleties of close relationships. You probably won’t need to be told you’re wonderful every few hours by those close to you in order for you to be confident that you’re valued.

Children, even into their teens, are typîcally very different. They don’t have the life experience yet to have the self-confidence in such areas.

That means you will need to offer them constant expressions of your love and how you value them. Hugs and kisses are important here, as is verbal praise and showing delight/amusement at what they’re doing.

Try to gush a little at their efforts, particularly when they’re say under 5-7. When they’ve made something, whatever the reality is, it’s better to say:

Children are more aware than many people think. They’re likely to recognise that their effort wasn’t the best in the class but what’s important to them is the belief that in your eyes, they are the best!

If your child wants to draw a picture or build something, work with them to support what they’re trying to do. It’s sometimes better for them to learn by failure and experience than have a parent take over before they’ve even started and show them “the best way to do it”.

If you have to disappoint them, don’t lie

Almost all parents have experienced the agony of having promised their child something, then needing to back out. Trips out that can’t happen for one reason or another, are perhaps a classic example.

Children are very sensitive and can sense parental lies. So, if you can’t go to the zoo because you now need to work or don’t have the money – say so. Don’t blame the weather or other false circumstances.

As they age, your children will grow to respect your overall honesty in dealing with them.

Give them freedom with support at a distance readily available

From as young as perhaps 9 months, your child will start to show a degree of independence when they begin to toddle without you holding them.

They’ll relish you being around in case they fall or get scared but they’ll also need to know you have enough confidence in them to let them find their own way.

This will be a theme throughout their childhood. Most kids with great parental relationships know they’re trusted to have a degree of freedom commensurate with their age but also that their parents are available for support if they need it.

That means you’ll have to work hard to avoid being over-protective and accidentally constraining their development. It’s not an easy thing for many parents to balance.

Never mock them in front of others

A bit of gentle ribbing is fine in the family context, if done with humour.

Mocking their efforts in front of other children or adults outside the family is never a good idea. This is painful for kids and many people as adults still remember such events decades later with emotion.

Engage with your children – constantly

The old Victorian attitude that “children should be seen and not heard” is still sometimes encountered.

Build your relationship by encouraging them to express themselves in as many different ways as possible. Talk to them and even more important, listen to them and respond!

All these steps will help your relationship develop over time.