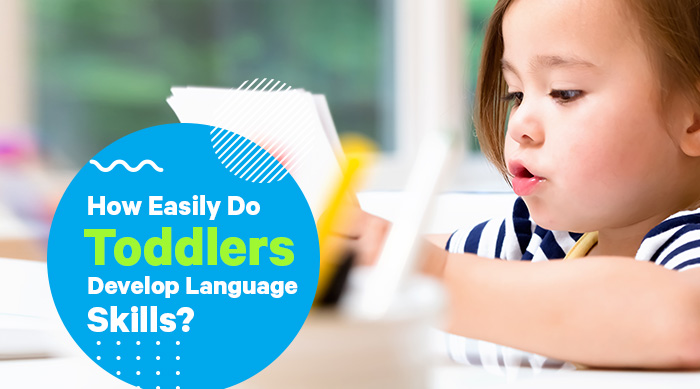 The psychology behind the acquisition of language skills is complex and clearly, we can’t do it justice here.

For most parents and care providers, the most important aspect of this is what they should be doing to help their children develop the skills necessary to use language to its full potential.

Psychologists have been arguing for well over a century about how much of language development is innate and how much is a product of socialisation. It remains a controversial subject and here we’re only stating a summary view based on personal interpretation.

It is seemingly the case that all children have an innate capacity to learn languages. This can be seen in very young babies, who will typically spontaneously start to babble and make cooing noises from a very early age.

However, language itself is learned via social interaction and education. There are very, very few cases where people have grown up in isolation from other human beings (the circumstances of such are fiercely disputed) and their language skills have been very limited to non-existent.

Do all children develop language?

Yes – at least to all intents and purposes. There are a few very rare medical conditions that might inhibit language development in some cases.

They won’t be discussed further here.

From our own life experience, we know that children develop complex language skills at different rates.  Some are seemingly faster learners in that domain than others.

As you might expect, the reasons for that are again hotly disputed.  It is widely accepted that very significant factors include:

All these areas are important because a lot of language is learned by imitation.

It also introduces the current very controversial debate about TV, PCs and phones. There is a strong suspicion that children who spend excessive time interacting with technology MAY be more prone to reduced vocabularies and articulatory skills.

Again, most of us know adults and children who are seemingly very ‘gifted” in terms of their speech capabilities. By contrast, many others from similar backgrounds seem to be rather less so.

This is poorly understood but there is some evidence that certain children may have a greater genetic predisposition towards language acquisition and deployment than others.

If all other things such as education and social stimulation are equal, such children may find it easier to learn and use complex language than others.

So, what is important?

The vast majority of young children are perfectly equipped at birth to learn and use complex language.

As they age, to develop and make use of that potential, they need stimulation. That’s because developing complex language skills is often necessary to influence your environment. The child who wants something needs to learn to ask for it if they can’t do it themselves.

It’s therefore imperative that toddlers are in environments where they need to and are able to interact with others – notably in early schooling.

While acknowledging that some children are quieter and more reserved than others, professional care providers will usually notice very quickly if a child is “sitting on the fringes” and not engaging. They must take steps to bring them back into the main body of the class and ensure that they’re participating in all senses, including verbally.