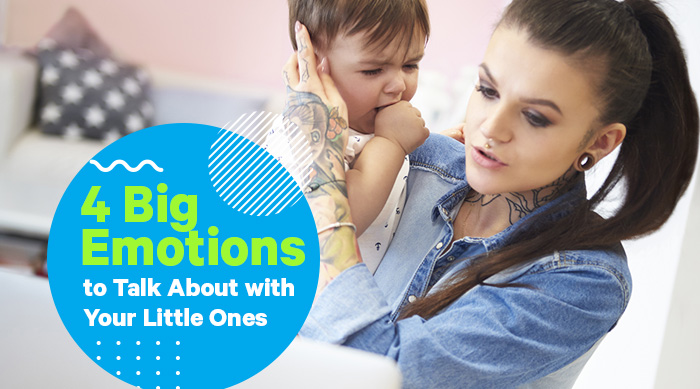 4 Big Emotions to Talk About with Your Little Ones

However, kids have no instinctive way of understanding their own emotions. It’s something they have to be taught and there is now plenty of evidence to show that children who do understand their emotions are likely to do better at controlling them and becoming more rounded individuals.

Here are four you should be thinking about discussing. What age your children need to be before they’ll be able to understand will vary depending upon their development. You own knowledge of your child will guide you on that.

Your child may suffer temper tantrums (they’re fairly common). They may arise for little or no obvious cause.

Perhaps your child has become ‘logically angry’, in that a sibling has just taken one of their toys etc. Those situations are typically easier to deal with.

If your child is angry, don’t just tell them to “stop it”. They probably can’t. Instead, sit them down and try to calm them. Try to work out with them why they became angry and explain to them why anger isn’t the best way of dealing with things.

Don’t expect instant fixes but over time, your child will learn to analyse the causes of their anger and to define more appropriate responses.

Again, this is a perfectly normal emotion that we are almost all vulnerable to.

It can arise in children due to either “things” or people. Normally “things” involve other children who may have a toy or similar that the child wants but doesn’t have. “People” more commonly involves perceptions, often misguided, that someone or something else is getting the attention that the child thinks should be directed to them.

Most adults learn to hide jealousy well, whereas kids will react to it and may try to take the item in question or possibly become disruptive to try to become the centre of attention.

Try to explain to your kids what this feeling is and why it can be a bad thing. You can talk about sharing and how what they perceive can be wrong – such as thinking that a sibling is getting all the attention.

It’s very unlikely you’ll be able to stop your child being jealous but you may help them to understand and control how they react to it.

This is closely linked to our animal survival instincts. As such, it is perfectly normal and arguably highly beneficial in some situations.

Some argue that fear is ‘learned’ but that seems intuitively unlikely. A very young child will demonstrate symptoms of fear if, for example, they wake up alone in their cot at night – and they’ll let you know that by crying for attention accordingly.

True, older children may see things on TV or hear things at school that do frighten them.

Given you can’t insulate your kids from external contacts as they get older, you should again make the effort to sit down and help them to identify the emotion. Try explaining to them that fear is natural but differentiate between fear that is useful and sensible (rivers, electrical cables, hot surfaces etc.) and those fears which are irrational (ghosts, the dark, aliens etc.).

This might be the loss of a loved relative or pet. It might also be something more intangible, like being told that an eagerly anticipated holiday or day trip has just been cancelled.

These things are very difficult to explain to children. All you can do is help them to explain how they feel and try to sympathise and offer as much emotional reassurance as you can.

Try to explain how life moves and sometimes things happen that make us feel sad but that they’re usually followed up by things that make us all feel happy again.

Don’t try to tell kids that being upset (or afraid) is somehow ‘wrong’ or ‘weak’. Instead, encourage them to experience and understand their emotions.