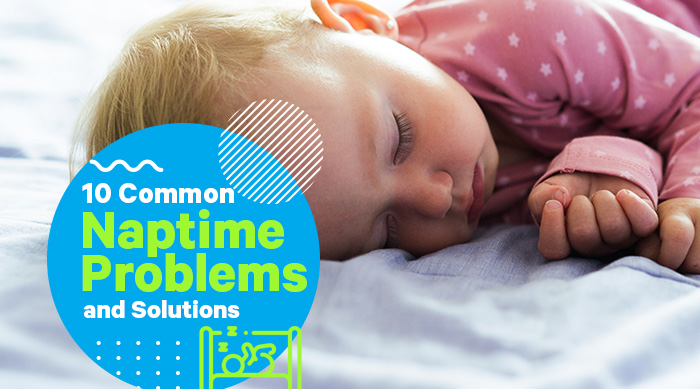 Naptime can be a chance for parents to get a well-earned rest at the same time as their toddlers.

However, it can also be stressful if the children object!

So, here are 10 common problems and their solutions. In passing, we’re discussing here toddlers rather than younger babies.

1. Don’t swim against the tide

There is a huge variation between children in terms of their need for sleep in both duration and timings.

Some children, even from a fairly early age, don’t need naps. Read the signs – if your child is clearly not tired and is surviving fine through the day without a nap, then trying to force them to take one is simply never going to work or be trauma-free.

2. Prepare for the nap by ‘winding down’

Kids who are in the thick of an exciting game or other demanding physical activity, don’t like being told it’s “nap time”. If you do so, your chances of getting them down easily will decrease to zero.

Instead, try to calm them down for a few minutes in the run-up to nap time by reading a story or similar.

3. Darken their room a little

It can be difficult for almost anyone to get to sleep if the sun is streaming in the windows. Kids are no different.

Toddlers will find it hard to sleep if they can hear older siblings running around and having a great time elsewhere in the house or outside in the garden. They’ll want to join in!

So, try to get others in your home to cooperate.

5. Make it their idea

Avoid telling your children they must have a nap because you say so. That can make it sound like a punishment.

Instead, from the earliest age, convince them that they want one so that they’re ready with more energy for all the fun things to follow afterwards. Of course, there’s a slight risk here that they decide they don’t want one and think it is their decision!

Some children don’t sleep well on a full stomach and you won’t want them needing the potty 5 minutes after you’ve put them down. A small drink might be fine immediately beforehand but keep quantities down.

Incentivise them to welcome the nap by settling them down and reading a story as you do so.

8. Link the nap to benefits

You can legitimately point out that if they have a mid-afternoon nap, then they may be able to stay up a little later.

Many toddlers respond well to this one.

Many modern homes are well insulated, which is great during the winter but it can mean that they’re also poorly ventilated during the summer.

Make sure that the bedroom or nap location IS well ventilated and is not too warm. Kids can find it hard to sleep if it is too warm/stuffy and some medical professionals also advise against it for health reasons.

Many toddlers like the idea of Mum or Dad also having a nap at the same time.

Don’t do this with them but take some quiet time in a chair yourself – or have a nap!

You may well need it and your kids will see their own nap as something that is perfectly normal and not something reserved for the smaller members of the family. So, joining in from their viewpoint, will encourage them to join in too.